As I write this I am back in England, and ready to start work again tomorrow. It is a strange realisation. Almost as if I was never actually in France, but with the distinct memory of being there. It may be strange to start a travel blog from the end, but I have not experienced this blues-like denial that I am back in England, or that I ever left. There are still a great many things about England that make me smile and that are just as beautiful as France, but it is that change from normality that I miss.

As I watched the train take me from the airport back to the countryside of Essex, I appreciated the greenery and the buildings I might normally ignore. I found new love for my own country, having loved another. But still, that memory in the back teases the traveller in me.

One of the most astounding memories of my time in Nice was actually when the weather was poor. I had decided to go into the old town of Vieux Ville, and attempted to climb Le Park De Chateau to see the fantastic views mentioned online.

It started as a sunny day but my phone forecast kept my hopes very low. I once again walked along Les Promenade Des Anglais and this time noticed a mural on the pavement. It read: “L’amour Triomphera Toujours” which as a rough translation means “Love will always win”.

A few years ago, Nice was shocked by a terror attack, as a van drove into several people walking down the promenade. Many were killed, and others injured. This mural, along with the presence of heavily armed officers that patrol the centre, is a reminder of Frances strength despite their loss.

Taken aback by the phrase, I stopped to look at it for some time, and then carried on toward the old town.

Vieux Ville is a fantastic area of Nice, and shows the city’s Italian’s history, too. The buildings are narrow, like the alleyways in between them, and every step is greeted with a new colour, a new vibrancy. While I was here, and in love with the Franco-Italian architecture, I stopped at a local store and tried the local and famous Nicoisian dish Socca. 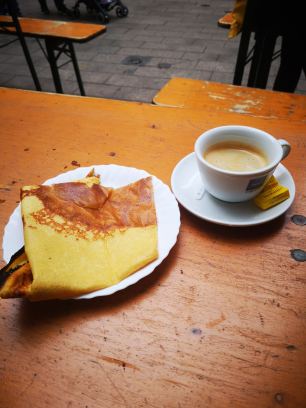 Socca is a savoury pancake made of Chickpea and is surprisingly filling with a bold taste. Washed down with a small Americano, it was a wonderful start to the day. I grabbed a bottle of Orange juice from a shop nearby and began my journey to the top of Le Parc De Chateaux.

I love a good walk, so this wasn’t too much of a difficult task for me, but some might find it a little bit of a trek getting to the top but it is definitely worth it. I walked at every chance I could get. Staying in the airport town of St Augustin, it took me roughly 90 minutes just to get to Vieux Ville, and then perhaps another hour to get to the top of Le Parc De Chateaux. Climbing the steps, and hills that lead to the top, the view becomes increasingly more and more beautiful. At every point, I told myself it could not get more wonderful, and then just a few minutes later I would be proved wrong. Nothing, however, was quite like the very top. 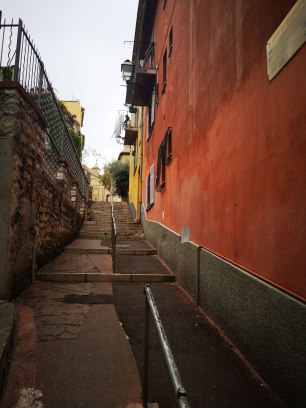 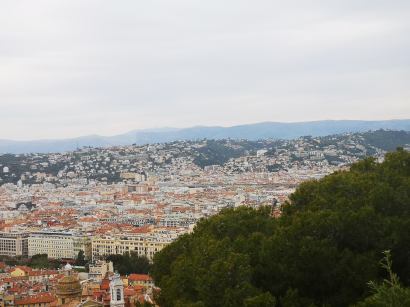 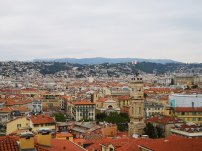 Once I had reached the top, I got back down and sampled some local Ratatouille before retiring back to the flat, totally exhausted but utterly satisfied.

A little exhaustion was not going to stop me from going back out the day after, so once I had rested and slept, I was back up! This time I set out for the museums. This was a strange day. I was nearing the end of my stay and planning my trip to Monte Carlo the following day. I was feeling the sadness of leaving this beautiful town behind, and also the stress of trying to pack in as much as possible into my remaining time.

I began by visiting Le Musee De La Photographie Charles Negre. The gallery of photography that was split between a permanent exhibition of Charles Negre’s work and an ever-changing temporary exhibition. I started with the temporary exhibition, which was a powerful display of the work of Christine Spengler. The walls found themselves decorated with photographs of mid-war moments, children holding guns looking as innocent as if they were holding a lollipop. It was an odd experience, to see these conflicting feelings but also humbling to understand I have been lucky not to have been surrounded by warfare.

Next door was a more subtle affair, with structures and stark portraits and most fascinatingly a collection of cameras from across the years. As a photography fan, it was a nerd’s perfect paradise.

Once leaving, I headed to the museum of contemporary arts, which for the record is everything you might imagine it to be. I was completely out of my expertise. There was art and structures that made absolutely no sense whatsoever to me. There was literally a patch of blue protected by a glass box. It made me want to revisit my university library and study every art book ever to train my perception. It is, nevertheless, worth a look.

The best part of the day, bizarrely, was walking back home. Not because I was leaving the town, or the confusion of contemporary art, but because it rained. It poured in fact. And I felt ecstatic. I played music through my headphones, and walked at a normal pace, pointing my face to the sky and letting the drops drown my skin. I felt at peace, in a way that being rained on in England probably would not give me. Not because it was France, but because it was different because I had proved so much to myself already and I was feeling indestructible.

All I had left was to visit Monaco and my holiday would be over. Oh, the days fly by.