London’s essence, it’s chaotic streets and it’s size had terrified and intimidated me for many years. As a child born in the mid-90s, growing up during a time in England where anger, riots, gangs and even terror was increasing and the news seemed to be constantly of new horrific incidents, my sensitive mind latched onto that quickly and unrelentingly. Even as I left my teens, I was still a little nervous of the place. Eventually however you realise a few things 1. the bigger the place, the more frequent the news and 2. generally speaking, you are usually as safe as you allow yourself to be.

As I stood on the train from Chelmsford to London Liverpool Street I watched those around me, all going somewhere, but all from completely different places. There were laptops, books, laughing families, suits, casual wear, even a girl in pyjamas accessorized by Doc Marten boots. A lady around my age wearing a formal outfit and seemingly stone-faced appeared to be trying not to smile at the chatty toddler next to her seat. I wondered what she was trying to hold back, or whether she was just nervous as to where she was going and who she was meeting and didn’t want any distractions. Regardless the interaction, or rather avoidance of one, fascinated me intermittently throughout the journey. Aside from all the people, coming out of a bone-chilling winter I could not ignore the sun and blue sky seeping through the windows of the train, even the warmth of its rays on my neck to comfort me that spring was coming. I felt comfortable. Comfortable is a word I never would have imagined using on a train journey, let alone a train journey on the way to London. Yet these journeys were becoming more natural, but not more predictable and that filled me with an excitement and optimism for the future. 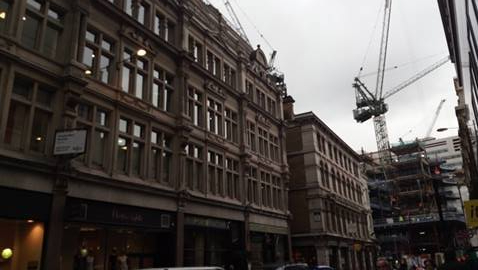 Round the corner from London Liverpool St

The journey, which unless you catch the fast train takes around 40 minutes went by quickly and smoothly. It turned up on time, and it arrived without any delays. The day was getting off to a good start, though I would spend the next 15 minutes getting lost. I left the station and immediately remembered how big the buildings were as soon as you leave Essex and the countryside, finding the rooves means craning your neck to the sky. I had come out of a different entrance to the last time I came to this area, yet I was determined to find my way to Shoreditch High St. I opened my maps on my phone and tried to follow it’s instructions, but technology is not always the greatest assistant and before long I was confused and it had started raining. Knowing that I was meeting my friend, a talented photographer and filmmaker by the name of Max Moore (https://www.instagram.com/maxjomoore/) who I met at Uni, I doubled back to the station and found the entrance I was familiar with. Once I had repositioned myself, I knew where I was and ditched the unhelpful mobile assistant. Both hungry we decided to meet in Boxpark, a wonderful food mall I could not recommend more.

The outside of Boxpark.

If you visit Shoreditch and are hungry then you have to visit Boxpark. It is a collection of ship containers converted into shops and restaurants, at the bottom you can find shoe shops, vintage fashion, cards, stationery. At the top are a selection of restaurants all catering to a vegan following that makes up a large portion of East London in general. Though the restaurants and food mall itself is, in comparison to most, fairly small, it is very popular and benches and queues fill up quickly, some meals can be a little pricey, but it is completely worth it.

I found us some seats and once Max arrived we bought meals at Cook Daily, which serves a lot of Asian, and Caribbean inspired food. I got Vegan Tofu Adobo, an incredible taste explosion originally a Filipino dish using chicken. The taste lingered on my tongue and played with my taste buds for the rest of the day. The seasoning, sauces and selection of carrots, onion, Okra, Broccoli, Tofu and more all created this delightful and refreshing dish that kept my stomach full and content til I got home. 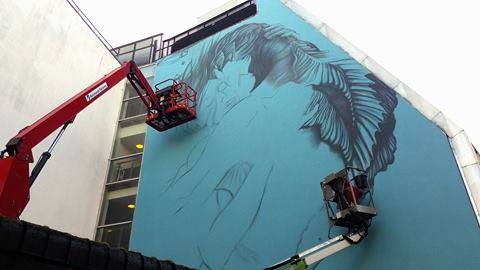 Street art being painted, likely a commissioned piece for an exhibition or to advertise a film.

We had bought tickets the night before to watch Black Panther at a charity run cinema and gallery called Rich Mix, but still had about 2 hours before it started. So once we had eaten we carried on walking around and Max, who knows the area better than I took me on a “poor mans tour” as he called it. We went round in a circle, dipping through alleyways were the walls were decorated with street art and commisioned pieces for advertising. Colour dominates Shoreditch, across its buildings, in its character and on the clothes of its residents. A truly beautiful district with an endless supply of creatives and artists set to make a change in the world through their craft and passions. At several moments we realised there was also a major film being shot somewhere around the district. There were cameras on dollys driving past us followed by large equipment vans, and down the street, there were lighting grips unloading their equipment (far more of which than we had ever had at our University). We visited markets in Spitalfields, a little further up the road near the station, and discussed what it meant to look for jobs at this age and how crucial London is in our industry. It was a relaxed but thoughtful moment.

The pattern of the Rich Mix Cinema which felt very homely and welcoming.

Eventually, the time came to watch Black Panther, a movie I had been excited to see and which had been heralded as a masterpiece and a historical piece of cinema. I am, however, always a little sceptical of reviews, both on the bad side and good. The patterns on the sides of the walls were like cultured carpets or curtains that you might expect to find in the house of that one rich friend you have. Yet it felt welcoming and homely, and the patterns made it feel like we were sitting in my own home cinema. The film was masterful and deserves its own post, but I will say that films like that, that create such a visceral experience are essential to the industry and the way we appreciate the medium. But a review will be up soon so look out for that.

Facing the gherkin on the way back to the station.

As we walked back to the station before parting we spoke of how London is different now we’re older. I can look at the city, I can see the rushing business people, the groups of commuters crossing the road on a green light, the constant noises, and be inspired as opposed to intimidated. Shoreditch is large enough that it has everything you could need, and still summarises what London is to me, but is small enough that it holds a feeling of a Haven, like an escape from the very inner city mania. London is no scary monster, it is no uber dangerous place to be. It is somewhere that empowers you, and influences you to adapt and evolve as a person, you find the most fascinating of places and people and food. Shoreditch is not the only place I have been to in London and is a little too expensive for me to live in, but it is becoming one of my favourite places to visit, without a doubt.