Success is a funny thing. It comes with a whole host of problems, and discussions. It’s also pretty difficult to talk about in what is effectively between 800-1000 words (my general word count). So imma go ahead and split this post up into titled sections, hopefully making it easier to delve into, and also digest easier as a reader. While we’re at it here’s an overlook/contents page, if you will, of those sections (that way you skip past all the stuff you don’t fancy reading – which hopefully isn’t any of it):

This is a quote from a spoken word poem called ‘Repetition’ by Phil Kaye. As the poem goes on to say it works for everything. Success, I’ve found, in particular. If you say it too much, if you rush it too quickly, or sacrifice too much creatively, it becomes arbitrary. The reason I also use this quote from Phil Kaye is because it creates a nice little segway into the first section:

Idols Are Human And Have Waited For Their Moment, Too.

Idols. Man, over the years that I’ve understood what it has meant to idolise and, more appropriately, to admire, I’ve had several idols. The 4 pictured above (Phil Kaye, Sarah Kay, Gabrielle Aplin and dodie) are merely  4 of my favourite, and continuous idols, but don’t cover the full stretch of all that have inspired and, creatively and personally, affected me. HOWEVER, with idolisation and admiration comes a level of insanity. Is that too harsh? No, I think that’s about right. It’s why so many people become terrifyingly obsessed with their idols, and why some defend actions that, quite frankly, cannot and/or should not be defended.

While I have never been insanely obsessive over my idols, I have on several occasions appreciated them. What I mean by that, is I’ve written reviews of their work, or I’ve left comments or tweets to show them that, along with several other people, I admire their work. I think that’s important. It shy’s away from being frightening and over obsessive, but it also tends to the essential human that so many people forget exists.

The biggest problem with distancing celebrities and idols from humans is that they become underappreciated and the work they’ve done to get there is often disregarded. What this also creates is an issue within the self-image of the fan, “why is it taking me so long to become famous like them?” “why can’t I be as successful as them?”. Unfortunately it’s a common and, funnily enough, human thing to do. Your mind becomes impatient and you look to your idols for help, but of course they have already, to an extent ‘made it’ regardless of how long it’s taken for them to get there. Idols are human and have waited for their moment, too. It’s important to remember that. Something to work toward. The lyrics/poetry/art of an idol may inspire in you, a need to inspire others but A) who says you’re not already doing that? and B) they may have taken just as long to get there as you will.

There is a reason their work relates to you so deeply.

Calm Down, Have  Faith In Yourself, And Enjoy Your Bloomin’ Life While You Can 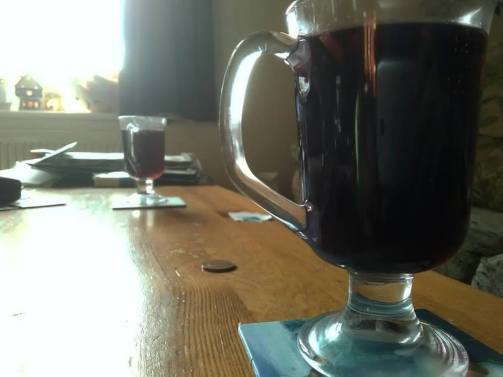 (I know I’m recycling a previously used photo but to hell with it, I was relaxed that day and that serves the purpose. Mulled wine forever ya know)

To again quote an idol:

“Love, break, and learn
What else are you young for?
Fuck it, hurt whilst you can” (Life Lesson, dodie)

I think in my 21, going on, 22 years the moment that has furthered my life the most and made me happiest is where I’ve got to the point where I’ve just said “fuck it”. You start taking more chances, more risks; you start to worry less about the menial things that racked your brains so strongly before.
Yes, I’m sure success is lovely and all that, but so is enjoying your life. The journey to success will no doubt present itself with so many instances of difficulties, and for many of us poor souls, depression. But that doesn’t mean to say that the entire of your life in the meantime must be full of sadness and safety

Don’t put your entire mental health, and life on the line to attempt to pursue a success that may not live up to your expectations. If you succeed gradually, you are getting used to adapting to it; you are becoming slowly aware of the ways to deal with it.

Brand Yourself Appropriately, And Don’t Pretend You’re Some Other Poor Bugger 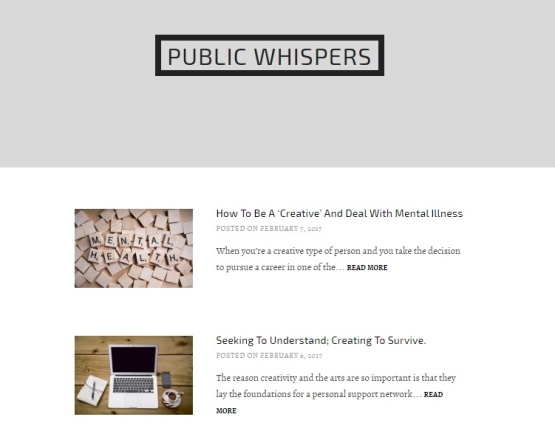 Alright, so calm down, chill out with the accusations of arrogance. I’m not using my own web page as an example because I think I’m a great example of branding and perfection. I’m not, I’m still getting my head around the smaller parts of it. BUT I feel confident enough to say that I know who I am, or more specifically, I know who I’m presenting myself as. Largely speaking they are the same person, but on the internet its too easy to present oneself as completely different to the truth. Here’s why that’s a bad thing…

If you look at my blog webpage and the design of my Instagram, you should notice one particular thing: minimalism. I’m intentionally keeping it as minimalist as possible, because visually I’m a relatively minimalist guy. Also the only two names I keep reffering to myself as are Liam Xavier and Public Whispers. The former is my actual name. The latter is my blog name, which is completely intentional, and if you read my ‘About Me’ section you will see is personal to me.

As someone who is prone to depression, and problems with identity, presenting myself as a constantly happy, and eccentric guy would be to do a disservice to myself and to my audience. Not only would it promote the bottling up of emotions, but it would also cause me to pause every time I wanted to write a blog that wasn’t happy nor eccentric. Brand yourself appropriately, and don’t pretend you’re some other poor bugger. It’s important.

Finally, Don’t Get Too Wrapped Up In The Numbers, And All That Jazz 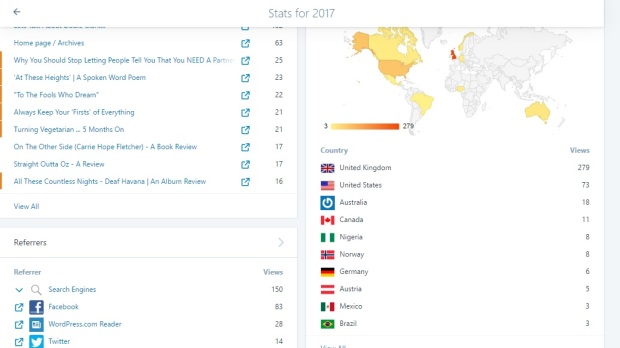 The last thing I want to say is don’t get too wrapped up in the numbers. It’s so hard and it’s probably what I’m most guilty of, especially seeing as my blog this month is performing worse for numbers than normal.

The stats you see above are mine for 2017, they’re not that great, but they’re also not awful. While it is helpful to know that 279 of my views have come from the UK and 150 referrals have come from search engines and to see which posts performed better than others, its dangerous. Not because of the specific but because of how easy it is to remember that the post before/ the album before/ the poem before etc etc performed better than the new one. Big deal.

Yeah, sometimes it can be because of the content, but also people and their preferences and traffic varies so much that it’s hard to keep up. It goes up and down no matter what profession you’re in and in order to not go stark raving mad, you need to find a way to utilise the statistic without making them become a problem for you.